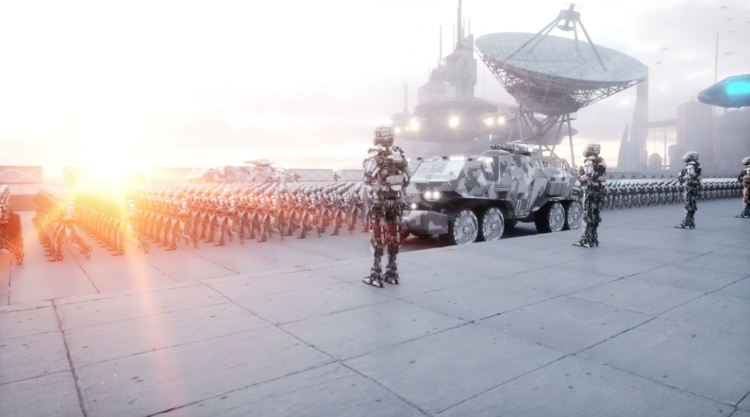 We'll be the first to admit that AI is scary.

We’ll be the first to admit that AI is scary.

Recently Ibrahim Diallo, a software developer, was fired by AI. He wrote a blog post about the experience. It’s an eyeopener, and a reminder of something that we talk about alot —AI without the right implementation doesn’t instantly solve problems and can easily create more.

But there’s a larger story worth exploring here and it’s about the kind of world AI may eventually bring us. From visions of super-intelligent machines seizing control of the internet, to robot overlords with little regard to human life, to complete human obsolescence, there are an unthinkable number of ways this whole AI thing could go horribly, horribly wrong. And yet, many scientists, futurists, cyberneticists, and transhumanists are downright excited for the coming dawn of the post-information age lying just beyond the invention of the first superhuman, general AI. To get in on the hype (and maybe quell some worries), let’s take a look at what exactly has all these smart folks giddy. What are the possibilities of a world with supergenius silicon titans? Here’s some possibilities, roughly in order of future development, although general AI technology is so powerful, there certainly are many more mind-bending possibilities than these.

Filtering noise, making connections, and expanding knowledge (5-10 years away) What do vitamins, horse racing, and the price of bread have in common? Possibly, nothing. But a general AI can figure it out for sure, and also find the other hidden connections between, essentially, everything. After all, as was put by naturalist John Muir: “When we try to pick out anything by itself, we find it hitched to everything else in the Universe.” This sentiment is often repeated, but harnessing the power of a general AI offers a real, viable path to discovering the depth of connections present in the world.

Today, machine-learning algorithms often work by looking at data, making some tweaks, and charting responses to determine how one variable affects another. Interpreting these changes allows the AI to predict outcomes, determine how to act, or simply classify information. And when a general AI gets to work on the huge amounts of data that already exist (and will continue to be generated), we as people will be able to learn so much. A growing percentage of scientific research centers on secondary data analysis, or searching for new trends in data that have already been collected. Secondary data-driven research is extremely low-cost, efficient, and accessible, in fields ranging from sociology to medicine. A sophisticated general AI could conduct millions of these studies, 24 hours a day, every day, in every field, at astounding speeds. And, with advancements in natural language processing, the AI could publish the research for people to look at and understand. Of course, this sort of connection-searching is problematic; after all, correlation does not equal causation (here’s a website that does a great job of pointing out examples of false-causation trends). However, the benefit of a true general AI is that it will be able to discern whether or not the correlations it spots are true connections or merely coincidences, at least as well as a human researcher, and much, much faster. Because testing connections and processing data are the current uses for artificial intelligences, you can be sure there will be rapid development in this field in the coming years.

The end of work (10-20 years away) Yes, this has been promised before, and is often promised again after new scientific breakthroughs, but it could really be it this time. Automation in factories didn’t free us from work, exactly, but it did take over jobs within its domain, such as mass-production and precision-assembly positions. Self-driving cars are on the verge of swooping up 5 million transportation jobs in the United States alone. And for a general AI, its domain bridges both computation and creative thought. So, just as automation has taken over factory positions, general AI could replace skilled cognitive workers like programmers, engineers, mathematicians, and even artists like poets, painters and musicians, leaving a whole lot of nothing for people to do all day (for some cool examples of AI-created art, look here, or here, or here).

Even if work doesn’t end entirely, though, count on your workload and life changing for the better. Have you ever wished for a great personal assistant, someone who can scan through your email and shoot back answers to basic questions automatically, someone who will schedule and manage your appointment schedule, someone who can pick up a little slack when you’re feeling slow? Google is on it. Already, Google is rolling out a “basic” reservation-making AI which can call restaurants, make reservations, ask for hours, and the restaurants don’t even know they’re talking to a machine. Seriously, natural language processing has become sophisticated enough to trick humans in some standard cases, like asking for a table for 5 at your favorite Chinese restaurant (you can see a video of the announcement here). Soon enough, the AI will function as a full-on secretary, available for everyone, and some of your daily work headache will be alleviated by a tireless computer assistant.

Intelligence upgrades (and AI camouflage, too?) (20-30 years away) People have been trying to directly interface with computers since the 1970s, when the first human-computer brain-machine (BMI) interface was invented. So far, the development has been therapeutic, alleviating symptoms from neurological disorders like epilepsy and ALS, restoring hearing with cochlear implants, and helping quadriplegics move mouse cursors and robotic arms directly with their thoughts. It’s only a matter of time before enhancements are developed for neurologically-healthy people. Elon Musk has already thrown his hat in the ring with Neuralink, a company aiming to develop the first surgically-implanted, whole-brain computer interface, for the express purposes of enhancing human computational limits and, secondarily, connecting human intelligence with artificial intelligence (a great, really long write-up for the interested here). Not only does Musk hope that such a system could allow for offloading mental tasks to computers (would you like to be able compute 196003x3313 in your head?), he also hopes it’ll give us a lifeline when the AIs rise up. From Musk’s perspective, if you can’t beat them, why not become so intricately intertwined that destroying one would destroy the other? It’s a pretty neat survival strategy, blurring the line between us and the machine so any self-preservation instincts in the new machine-consciousnesses would automatically extend to us people, too. A hard pill to swallow, sure, but if we really become second best in the face of general AI, mutually-assured destruction can be a good deal for the little guy (us).

Human immortality (30-??? years away) Here’s a biggie: general AI could offer a viable path to massive extensions in human life, depending on how far one is willing to stretch the concept of “life.” Is a mind (and presumably, a consciousness) without a body “alive”? If you say yes, you could be the first in line to get your brain uploaded. By encoding your specific neural pathways into a general AI, it’s possible you could continue life, free from physical ailments, disease, and accidents, snugly inside a computer. And if your new computer architecture allows connections to form within itself, and disconnects old connections no longer considered useful, well, have you lost much besides your squishy, meaty body and brain? Many techies say no, and amazingly, the first companies promising brain uploads are already starting to crop up. A particularly grisly startup called Nectome has developed an embalming procedure so advanced that every synapse in your brain is identifiable after under an electron microscope, and will remain perfectly preserved for hundreds of years. The kicker? The process is 100 percent fatal. In order to embalm the brain so efficiently, their preservation fluids need to be pumped in while you’re still alive, euthanizing you but preserving the brain. Then your perfect brain can sit around for any amount of time until brain-uploading technology is developed, and Nectome will resurrect you in a computer. Not surprisingly, their target market is terminally-ill patients. And who knows? It just might work.

Not only could life be extended by physical protections and material upgrades, it could also be extended, at least perceptually, by upgrading processing speeds (Warning: far-fetched sci-fi logic incoming). The human brain has a few fundamental frequencies, called brain waves, that seem to dictate perceived consciousness. These waves range in frequency from 0.5 Hz when sleeping deeply to 30 Hz when absolutely alert, and other estimates put the maximum possible neuron firing rate at about 1000 Hz. Now, consider that the 8th generation Intel i7 processor released last year is capable of pulling 4.7 gigaHz (that’s 4,700,000,000 Hz!), and try to imagine what it would be like to live in one of those. Would you think 4 billion times faster? Would you perceive time as passing 4 billion times slower? And if you, a mere mortal human, could pack 4 billion seconds (that’s nearly 127 years) into every second, would you? Even if you lived a normal 70 years, by using a little back-of-the-envelope math, we’re talking about a perceived lifespan of 8.8 exa-years (8,800,000,000,000,000,000 years!). It’s been 13.8 billion years since the Big Bang, which is .0000138% of one single exa-year. And all this has been calculated using processor speeds that already exist. Who knows what our processors will be capable of in 2045 (Ray Kurzweil’s estimation for the first human-computer merger)?

The takeaway Obviously, the possibilities of generally-intelligent AI are enormous. As AI technology rapidly progresses, the future is looking more and more like a wild ride. No matter who you are, AI will both have something tempting to offer and something appalling that will make your skin crawl. Whether general AI will provide lightning-speed research or human-computer cyborgs is still unclear, but we can be sure the artificial intelligence future holds some drastic changes to human work, health, and the world as we know it. And look out; it’s all coming sooner than you think. One things certain, though, especially if you are an enterprise in 2018 —you still need to get your own IT house in order,, AI won’t be up to that job for a while.